U.S. forces in Iraq have captured a leading terrorist. The man, Abu Abbas, already has been convicted in Italy of a notorious hijacking, but the United States may be interested in prosecuting him for the death of an American during that act of terror. The case, however, has many legal and diplomatic angles, and it may be a while before it is resolved, RFE/RL reports from Washington.

Washington, 17 April 2003 (RFE/RL) — International affairs analysts and legal experts say it is too early even to guess what will happen to Abu Abbas, the Palestinian who directed the hijacking of the Italian cruise ship Achille Lauro in 1985 in which an elderly American was killed.

Abbas — whose real name is Muhammed Abbas — was arrested on 14 April by U.S. special military forces during raids in the Baghdad area, where he has been living since 2000.

Italy has convicted Abbas of leading the hijacking, which occurred in the waters of the eastern Mediterranean Sea. An American, Leon Klinghoffer, was killed during the two-day hijacking. Klinghoffer, who was disabled, was shot to death and his body — still in its wheelchair — was thrown overboard.

In 1987, Abbas was tried in absentia in Italy and convicted in the hijacking. He was sentenced to life in prison. In Rome yesterday, Italian Justice Minister Roberto Castelli said Italy wants the United States to extradite Abbas to Italy.

“Our government has never given up on chasing those who have committed crimes on the Italian territory or against Italian citizens. A dangerous criminal like Abu Abbas is no exception. This just shows Italy’s determination to fight international terrorism of all kinds,” Castelli said.

The question, however, is whether the United States legally has Abbas in custody, much less whether it has a right to extradite him to Italy to serve his sentence. Under the 1993 Oslo Accords on Middle East peace, no member of the Palestine Liberation Organization (PLO ) can be arrested for an act of violence that took place before 1993. That was the year that the PLO and Israel signed a mutual-recognition treaty.

The chief peace negotiator for the Palestinian Authority, Saeb Erekat, speaking in the West Bank city of Ramallah, demanded that Abbas be freed immediately. “We really urge the American administration to honor and respect Article 16, Paragraph 3 to the interim agreement of 1995 and release Mr. Abu Abbas in order for us and the Israelis to engage in a meaningful peace process through the introduction of the roadmap.”

James Ross, the senior legal adviser for the New York-based advocacy group Human Rights Watch, said Erakat may have a point and that there are many aspects of Abbas’ case that raise questions about his legal status.

First, he said, Italy tried him in absentia. Such trials often are fair, he said, but they are also open to problems, including weak representation of the defendant. He also questioned whether the Oslo Accords grant amnesty to Palestinians convicted of terrorist acts, and whether it is binding on any political entities other than Israel and the Palestinian Authority.

“Normally, trials in absentia are problematic in that a defendant isn’t able to defend himself appropriately. Assuming that the conviction was valid, does that mean it’s not covered by this agreement? Then, who [which countries] does the agreement cover?” Ross said.

He added that the United States must address these and similar questions before it even considers surrendering Abbas to Italy or bringing him to America for prosecution in Klinghoffer’s killing.

Others interviewed by RFE/RL agree that the Abbas case remains unclear, but they believe the United States intends to put Abbas on trial in America.

Arthur Helton, the director of peace and conflict studies at the Council on Foreign Relations, a New York-based private policy research center said he believes that the administration of U.S. President George W. Bush would be reluctant to free Abbas because it sees the Palestinian’s arrest as a positive accomplishment in the American-led war in Iraq. “There isn’t a lot to show so far, in terms of the war on Iraq, and in some ways this is the only trophy relating to terrorism so far,” he said.

Helton said how the United States proceeds with Abbas, however, is anyone’s guess, and probably is driven more by international politics than it is by law. “There are two levels operating here. One’s a political level and one’s a legal-process level. And that just means that they [the two levels] will have to converge and be reconciled. That could result in [Abbas] being rendered to the Italian authorities, or it could result in his being let go, I suppose. I think that’s highly unlikely,” he said.

Peter Raven-Hansen, a professor of law at George Washington University in Washington, said that he doubts that politics and law will be reconciled equally. According to Raven-Hansen, the United States — especially the current administration — has not been reluctant to pursue its own interests by ignoring international agreements that are not formally binding.

“It’s certainly an international obligation to the co-signatories, but we’ve often disregarded those for our own purposes. They’re not binding on the United States as a matter of domestic constitutional or U.S. law unless they took the form of a treaty that was submitted to the Senate for approval,” Raven-Hansen said.

The Oslo agreement is apparently binding only on Israel and the Palestinian Authority, Raven-Hansen added. He said the United States signed it only as a witness and therefore may be free to prosecute Abbas for the murder of an American citizen.

“The peace treaty was only intended to smooth the way for relations between the PLO and Israel and not to exculpate terrorists who commit crimes against persons outside that process. It would be kind of inconsistent with the administration’s very hard line on terrorism and their exhortation to everyone — including our allies in Europe — to work with us, to let this guy walk [go free],” Raven-Hansen said.

But like Ross and Helton, Raven-Hansen said the status of the Oslo Accords, as well as the determination of both the United States and Italy to bring terrorists to justice, leave the status of Abbas very much up in the air. 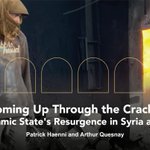 New book: The Islamic State in Africa
The Emergence, Evolution, and Future of the Next Jihadist Battlefront (Hurst)
https://t.co/W529ORTuFj

Since the start of 2020, 700 organized escapes have taken place in the al-Hol camp for families of former iSIS fighters. Smuggling has become big business. The price depends on the number of people, their age and destination.

Syria: Smuggling Out of the Hell of Al-Hol

Since the start of 2020, 700 organized escapes have taken place in the al-Hol camp for families of former iSIS fighters. Smuggling has become big busi...